Seven CWILL members gathered at Vancouver Kidsbooks Wednesday evening (May 18) to launch their new books for kids. The evening began with Joan Betty Stuchner and her picture book, Can Hens Give Milk? (illustrated by Joe Weissman).

According to Joan (and her chicken side-kick), the story takes place in the village of Chelm, which may or may not be mythical (one member of the audience claimed to hail from Chelm!). The main character, Tova, lives with her family on a farm in Chelm. When Tova’s father tries to find a way to get milk without a cow, hilarity ensues. 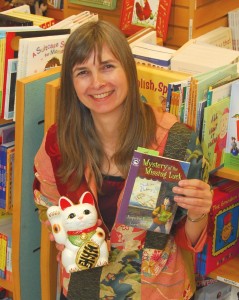 Jacqueline Pearce’s chapter book, Mystery of the Missing Luck (for ages 6-8), involves a Japanese bakery and a missing Maneki Neko, a lucky beckoning cat statue. Jacqueline brought along her own Maneki Neko (also known as a Lucky Cat), and shared some edible Lucky Cats from Japan.

New author Yolanda Ridge read from her novel, Trouble in the Trees (for ages 8-11), which was inspired by a tree-climbing friend, who stood up for her right to climb the trees of her urban townhouse complex. Similarly, the novel’s main character, Bree, sets out to change her neighbourhood council’s ban on tree-climbing.

Author Maggie de Vries had two books to share, Chance and the Butterfly, an award-winning novel now back in print, and new novel Somebody’s Girl (both in the Orca Young Readers series for ages 8-11).  In the first book, Chance finds school difficult and is constantly getting into trouble, but when his class starts raising butterflies from caterpillars, Chance finds something in school to care about.

Somebody’s Girl returns readers to the same characters as the first book, this time focusing on Martha, a girl who doesn’t get along with Chance. Martha knows she is adopted, but with her family expecting a new baby, she knows she won’t be number one anymore. She makes no secret of her annoyance at having to do a school project with Chance (in the photo below, Maggie demonstrates the length of a sturgeon, the fish Martha and Chance study for their project).

Cristy Watson and Lois Peterson both introduced novels for Young Adults (in the Orca Currents series for reluctant readers ages 10-14). Both authors talked about their different approaches to coming up with story ideas. The inspiration for Benched came to Cristy as she was walking around a neighbourhood park and noticed a burned spot of grass where a bench once stood. The missing bench prompted Cristy to imagine the character Cody and his friends, and what happens when they are challenged by a local gang to steal a park bench. 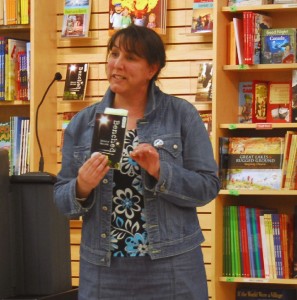 While Cristy Watson’s story and characters felt almost as if they had dropped into her lap from an outside source, Lois Peterson explained that she finds inspiration from her own real-life experiences. An incident involving a broken shelf when Lois was a child became the kernel around which the fictional story, Beyond Repair, took shape. Main character, Cam, has always had a lot of responsibilities around home, but after the death of his father, his burden becomes heavier. When the man who was driving the truck that killed his father turns up at his house, Cam feels it’s his responsibility to keep his family safe.

PJ Sarah Collins was the only author whose new book was not published by Orca. What Happened to Serenity? (published by Red Deer Press) is a distopian novel for Young Adults. Main character Katherine lives in a post-apocalyptic community completely cut off from the rest of the world. Her town is austere and run by utopians who discourage questions. When her best friend’s sister, Serenity, suddenly disappears, Katherine starts to ask questions and seek the truth about what she has grown up believing.