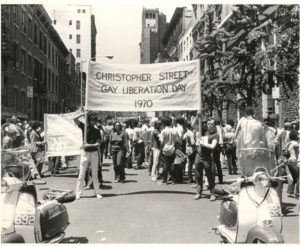 I was standing in front of about fifty children, enthusiastic and curious fifth graders, talking about my book Pride: Celebrating Diversity and Community. I’d just finished telling them about the Stonewall Riots, showing them photos of the Stonewall Inn, and of the Christopher Street Gay Liberation Day march through the streets of New York City in 1970—the events that paved the way for today’s Pride Parades.  I told the kids that I had wanted to write this book because I am queer, and have celebrated Pride for many years. And I moved on to the next slide, which shows a photo of a group of kids at Pride and says, LGBTQ+: Who celebrates Pride?

We began talking about what the letters L, G, B, T and Q stand for. The kids were relaxed, chatty, and engaged. One said that G meant gay, and another added that L stood for lesbian, which is “when women like other women.” But when we got to T, a teacher—an older man at the back of the room—held up his hand, palm out, traffic cop style.

“I’m going to stop you right there,” he said. And in front of the kids, who were seated in rows on the floor between us, he insisted that I stop talking about this subject. He said it wasn’t appropriate for the students to be hearing about it.

I was completely caught off guard. This was the talk I had been invited to give, but the teacher apparently hadn’t read the description before deciding to bring his students. I explained that the book and talk were completely appropriate for– and intended for– this age group. He said he was responsible for these children and would need their parents’ consent to allow them to hear discussion of this topic. He said it should be up to parents to decide if their children learned about these issues.

I tried to explain that I had done many talks about this book, and that this had not been a concern at any of the other schools. I said that school district and provincial policies in British Columbia support inclusion of issues of sexual orientation and gender identity, and that these issues are integrated into the curriculum—to which he said, no, they are not. (They are. In grade 5 Social Studies, for example, LGBTQ+ rights and same-sex marriage are suggested as sample topics. The province of British Columbia makes resources on sexual orientation and gender identity available through SOGI 123 to support this inclusion. And my book Pride is currently a finalist in BC’s Young Readers’ Choice Book Awards, the Red Cedar Awards, a school-based reading for grade 4-7 students in this province.)

I pointed out that many students have LGBTQ people in their families, or are LGBTQ themselves, and that they need to hear LGBTQ issues discussed openly.

He insisted that I stop talking about it and talk about creative writing and my novels instead. There were several other teachers present but none of them spoke.

The kids sat, wide-eyed, listening to all of this.

I told him that he was sending a very harmful message to the students by suggesting that this was a subject that couldn’t even be spoken about.

But I didn’t know what to do. I was so shocked that this was happening. I thought he would take his students and leave, and I felt like that would be even more upsetting to the kids. And it didn’t seem right that the students should lose out on an author visit because of their teacher’s ignorance.

So I told the students that they could get the book at the library if they wanted to read it, and that I was always happy to get emails from students and readers via my website. I fast-forwarded through the rest of the Pride book slides—pointing out a couple of wonderful photos of Pride Parades as they passed by, too briefly—and then spent the remainder of the time focusing on fiction. I gave a short reading—not very well, as my voice was shaking, my heart was racing, and I was still going round in circles in my head trying to figure out what just happened and what I should have said and done. Then we brainstormed story ideas and talked about one of my middle grade novels—The Summer We Saved the Bees— which they have just started reading together in class (it occurs to me now that they must not have got to the part with the lesbian moms yet.)

One of the students raised a hand. “I wondered about the message you were trying to send in that book. I thought it was about…about being yourself. About being true to who you are. Is that what you wanted to say?”

I had to blink back tears. “Yeah,” I said. “Thank you. That is exactly what I wanted to say.”

A few days later, I got an email from a student who was there. She wanted to tell me that she loved that I talked about LGBTQ+ issues and that she was very upset that I hadn’t been able to finish my presentation.

I will follow up with the school and the school district, of course. But for me, this incident points to a problem that is much bigger than one school and one district.

Pride was published two years ago, and it has been very well received. It won a Stonewall Honor, and has been nominated for numerous awards. I’ve been invited to many schools and have spoken to thousands of students. I’ve met wonderful people– teachers, librarians, booksellers, parents—who are working hard to create safer, more inclusive schools, to build LGBTQ+ collections in their libraries, to start GSAs and Social Justice Clubs and Rainbow Clubs, to say to all their students: I see you. I hear you. I support you. I’ve got your back. And I’ve spoken to many courageous young students who have told me about their journeys, about coming out, about their fears and their struggles and their victories, about how much it means to them to have access to LGBTQ+ books and to meet openly queer authors.

Which is all great—but I think it has lulled me into a false sense that the landscape in our schools is far better and more inclusive than it really is. Because of course, the schools that choose to invite me—an openly queer author speaking about LGBTQ+ Pride– are far from a representative sample. There are teachers who still avoid this subject and who—like this one—will even shut down discussion of it. Whether because of their own homophobia or transphobia, or because of worries about parental objections, or because they don’t feel supported by their administrators or their school district, it is not okay. It sends a message that is shaming, silencing and harmful to their students.

Our kids deserve so much better. 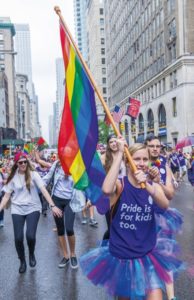 Robin Stevenson is the author of twenty books for kids and teens. Her novels include The World Without Us and The Summer We Saved the Bees, as well as the Silver Birch Award-winner Record Breaker, and the Governor General’s Award finalist, A Thousand Shades of Blue. She lives in Victoria, British Columbia. For more information, visit robinstevenson.com. Robin loves to hear from readers—and she always writes back.